The case for the Midlands & East: Population

The Midlands & East is the largest of all the macro broadcasting regions and nations, with some 17 million people, or 25.46% of the UK population.

Within this wide area, the  East and West Midlands are home to 10.8 million people or 16.1% of the UK's population. For comparison purposes only, that's more than Scotland, Wales and Northern Ireland combined.

6.24 million people live in the East of England Region.

The Midlands & East macro region is comprised of 3 statistical areas: The East & West Midlands and the East of England. Just as the macro North is also made up of 3: the North West, Yorkshire & Humber and North East regions. The macro South includes the South West and South East regions (but excludes London) whilst the Nations are Scotland, Wales and Northern Ireland.

It is important to describe the Midlands & East, for it soon becomes clear that the area includes the second largest city and conurbation in the UK, along with about half of England's mid-sized cities and a long list of counties. By doing so, we seek to underline the point that a significant section of the UK is simply not being served or represented by the broadcasters.

The second largest city in the UK lies at the geographic heart of England: Birmingham. The city has an immediate population of nearly 1.2 million people. The West Midlands County that immediately surrounds the city is home to over 2.93 million people and if we widen the radius again, then 3.8 million people live within approximately 20 miles of the city centre (see diagram below). This is the most highly populated urban area outside the capital.

Other important towns and cities in the Midlands - with populations over 250,000 - include Coventry, Derby, Dudley, Leicester, Nottingham, Stoke-on-Trent, Walsall and Wolverhampton.

Large towns - with populations upwards of 200,000 or more - include Colchester, Luton, Northampton, Peterborough,  Solihull and Telford. 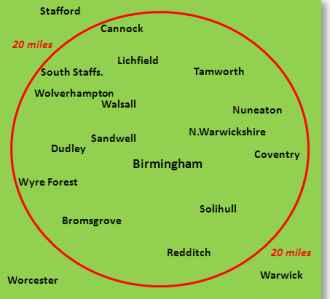 The case for the Midlands: Historical perspective

Back to the introductory page: Case for the Midlands