We firmly believe the BBC must make a firmer commitment to this region. We estimate that Licence Fee payers in the BBC's Midlands & East region contributed £896 million in licence fee payments in 2019/20, but we estimate generously that only £128 million was spent in the region.

Put another way, spending in the region accounts for just £19.39 for each Midlands licence fee. It is the lowest share of in-region spending for anywhere in the UK. Which also means that the MIdlands & East is contributing £138 per licence fee to spending elsewhere (mainly to London).

Yet, the Midlands & East region accounts for 25% of the UK population. The region with the most licence fee payers, receives the lowest BBC spending. 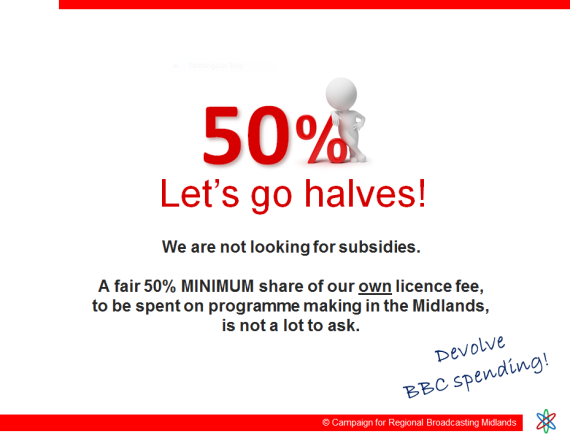 We want to see a much fairer, 50% share of our licence fee coming back into the Midlands region to support programme makers, regional jobs and to help raise the profile of this fascinating, talented and highly populated region...

Click on any of the links below to find out more:

BBC in the Midlands Today