On the previous pages we have outlined the facts. The Midlands has seen continual cutbacks by the BBC, to the extent where there are no network television studios left in the entire region and very little peak-time televsion made here whatsoever. Over on radio, the only regular production for the national networks is The Archers - but only by virtue of a commission that stretches back to 1950. Investment, jobs and focus have moved elsewhere. Despite all of this, the Midlands Licence Fee is exactly the same (£157.50 per annum) as those regions which find more BBC favours. Unless we can count on a reduction in the Midlands Licence Fee (an option that seems unlikely) then we must campaign for a fairer and more equitable distribution of the income that raised by it every year. 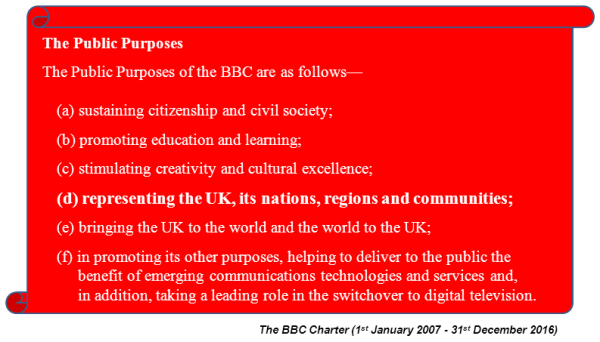 The BBC is a publicly owned body that owes its existence to parliament, which grants it a charter. The BBC Charter requires it to represent all the nations and the regions at a national level. As no programmes are made for peak time network television in the Midlands region and very little radio, then this requirement cannot be met. A chartered national broadcaster that takes the licence fee payers in its largest region for granted, should not be surprised if public support for it simply ebbs away.

The region that keeps on giving

Highly successful programmes like The Archers (the world's longest running radio drama, with 5 million Radio 4 listeners every week) or Top Gear (the highest rated programme on BBC2, the most watched BBC programme internationally and the corporation's biggest export earner) were originally commissioned in the Midlands. Ironically, these programmes could not be created here today in the current BBC landscape. There are no programme commissioners, networks or heads of department in the region.

To maintain its vitality, broadcasting requires a strong regional presence, one where programmes are made and where ideas are conceived. The beauty of the United Kingdom comes just as much from its regional diversity and culture as it does from its landscapes and buildings. Broadcasting benefits when it taps into the regions successfully. But that means all of the regions, not just some of them.

A commitment to the regions should not be a token or simply the fulfilment of a regulator's requirement. It should mean investment, access to facilities and a nurturing and encouragement of talent across all of the UK. In this way, broadcasting is more diverse, more interesting and more reflective of the whole country it serves (and we'll say it again: not just some of it).

Certainly, a region as large or vital as the Midlands & East deserves more facilities than a few local news studios. We believe that the BBC itself will suffer in the long term by not engaging with such a large, diverse segment of its audience.

If you have a view about the BBC in the Midlands, or have any ideas that wouold help it to re-establish its presence in the region, then get in touch. Please join the discussion - go to Contact Us to send an email or to complete our contact form.

The BBC in the Midlands Today

What you can do