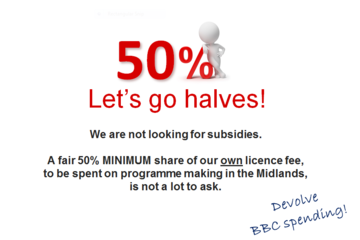 If you agree that half your licence fee would be better spent in your region, to make TV & radio programmes, employing people, and to ensure better representation on the national networks, then let's tell the Culture Secretary. Click the yellow button!

Displaying your signature at change.org is optional.

Here is what the petition says...

Petitioning the Secretary of State for Culture, Media & Sport:

The BBC has made great strides recently to decentralise its operations and spread expenditure more fairly around the country. Every nation and region now retains at least roughly half of its licence fee, except one: The Midlands only keeps 8.5% of the £942 million raised from the region's licence fee payers.

The new BBC Royal Charter should stipulate that at least half of the licence fee raised in a nation or region per annum should be spent in that nation or region per annum. This should be achieved incrementally within the first five years of the Charter period. By doing so the Midlands would be brought into line with the rest of the UK and other parts of the country would be protected from suffering a decline in their expenditure.

The BBC states that every pound it spends generates another pound in the local economy and that as a publicly funded organisation it has an important role to play in rebalancing the economy overall. By spending so little in the Midlands the BBC puts it at a serious disadvantage in terms of jobs, skills retention and developing a thriving media/culture sector. The new Charter should insist on equitable spending in all parts of the UK.